Read the Parts I, II and III of this off the beaten path adventure trip here, here and here.

On the way back from our adventure trip in the jungle we stopped at the place called Paritta. This place did not have that wild charm that we enjoyed in Osa Peninsula. Yet, it had a wonderful and secluded beach. We spent a couple of days chilling out in hammocks. Margarita drinks in all the possible rainbow colors were an added value here too. 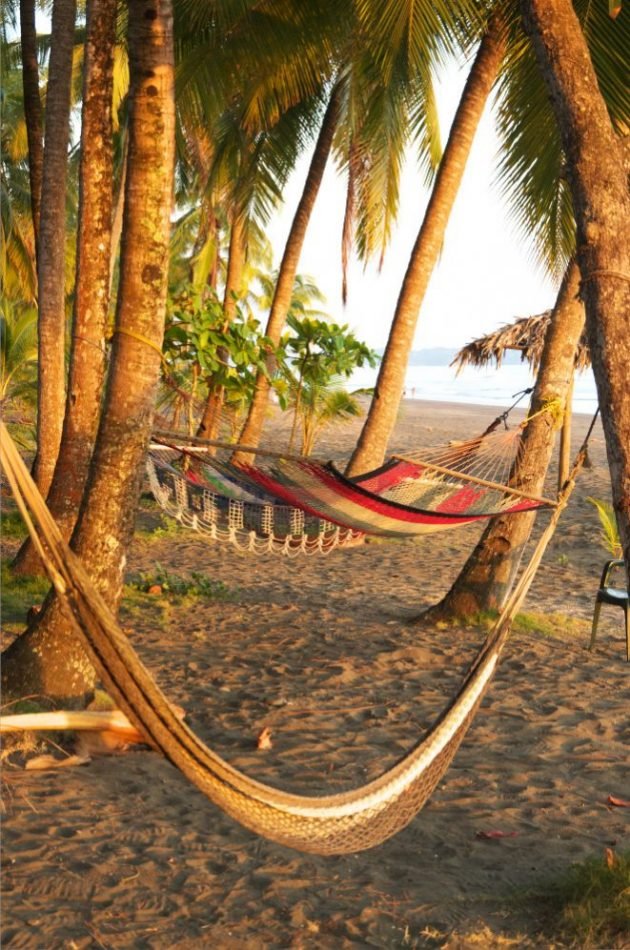 Costa Rica is a place where the business meets nature. It is an ecotourism hotspot. Rainmaker is in fact conservation project for the preservation of rainforest. It is a great environmental education place with many possibilities of canopy walks.

Canopy walks is a very popular attraction in Costa Rica. It gives you the possibility to rise to the top of the threes’ canopy and explore the wildlife there. We took several such “skywalks” during our trip. In short, it is a worthwhile experience. Most of the biodiversity in a rainforest hides in threes’ canopy. Thus, we would not be able to see it otherwise.

The hike in the park is not a long one. The hiking trail alone takes only around two hours in a slow tempo. Thus, it is not worth going there just for this one attraction. Yet, you might go there on your way to or from Osa Peninsula or to/from popular Manuel Antonio National Park.

After the hike, some of us remembered childhood and enjoyed jumping off the cliff in a river.

Adventure trip up in the mountains

Our next destination was Bijagua village in the mountains of North-West Costa Rica.

We had to say “goodbye” to our friend Janis, who had to return to his daily work duties in Chicago. We left him in San José airport. He had just got used to the different lifestyle he was immersed in during these days. Finally, Janis was ready for the adventures. Yet, he had to leave. A lesson from this is simple. Don’t go to a distant exotic adventure trip unless you have enough time to enjoy it! There is a big chance that you will not get out of it all the joy that you have hoped for.

Bijagua village is a place between two volcanoes: Tenorio and Miravalles. It took one full day to get there. When we went up in the mountains the landscape changed a lot. Finally, we got in the evergreen highland rainforest. It is so called cloud forest. The climate here was much more pleasant than in the hot and humid lowland rainforests. During the nights the wind was howling at the rooftop of our bungalow. It made already the special aura there even more mysterious. We slept so well there.

The place worth visiting in Tenorio Volcano National Park is Rio Celleste. It is a unique river. Its water is in bright turquoise color.

We woke up and got ready for our next hiking adventure around 4 a.m. This was already the standard for us during this trip. Getting up so early has a huge advantage if you want to avoid other tourists wherever you go. In early morning hours, even the most touristic spots become enjoyable. Thus, I always say, if you cannot get off the beaten path literary, try to get off the beaten time instead.

To get to Rio Celleste, first, we had to drive some five kilometers (three miles) on a very bumpy road at the speed of a snail. This did not surprise us anymore though. What was amazing was the destination. It was fascinating. We had several kilometers hike on a very muddy hiking trail. The trail crossed the cloud forest. We started before the dusk when the forest was still darkish. The tall trees were covered with wooded lianas and mosses. Mysterious sounds of forest animals interrupted the total silence of the forest. The place looked more like a fairy-tale forest. The cloud forest justified its name. It was partly embraced by a cloud. Hence, rain showers blessed us several times during the hike. Yet, the canopy of the trees is so dense in the rainforest that we felt only a tiny fraction of those showers.

Once we reached the river it was hard to believe our own eyes. Is this for real? The turquoise tone of the water looked so unnatural, yet so beautiful at the same time. Until recently scientists could not fully explain the specific color of Rio Celeste. Now we know that it has its specific color because of a physical phenomenon, which is known as Mie scattering. The presence of certain minerals in the water triggers this effect. Hence this causes sunlight to reflect in a way that gives the water its incredible hue. More details about this phenomenon you can find here.

This is definitely one of the “must see” World’s wonders. If you manage to get there before there are other tourist groups, as we did, you will not regret.

Bijagua village itself does not stand out with anything special. It has a small local supermarket there. As common for Central America, you can buy almost anything in such shops. There are goods starting from bread and yogurt up to the tires and drills in one place. 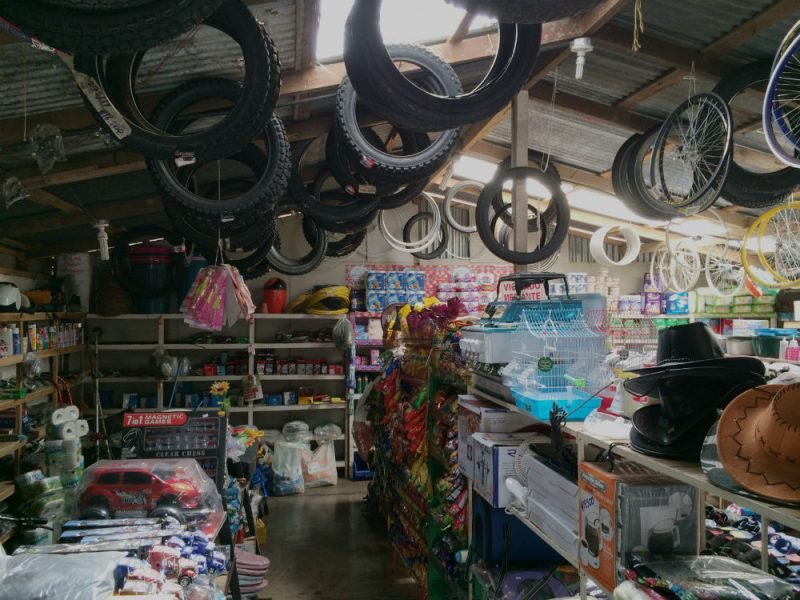 If you ask me the food in Costa Rica is pretty boring and rather expensive. Many dishes here are based on beans and rise. This is the most popular garnish in Costa Rica. The traditional dish called Casado is also based on beans and rise, of course. Edgars enjoyed it very much. Typically for Central and South America steak is common here too. Yet, to be honest I managed to get a good one only once.

Car rent agreement did not allow us to leave the country. Thus, we decided to spend one of our travel days on a traditional tour to neighboring Nicaragua. Well, it was worth it. We got an insight into a different country. 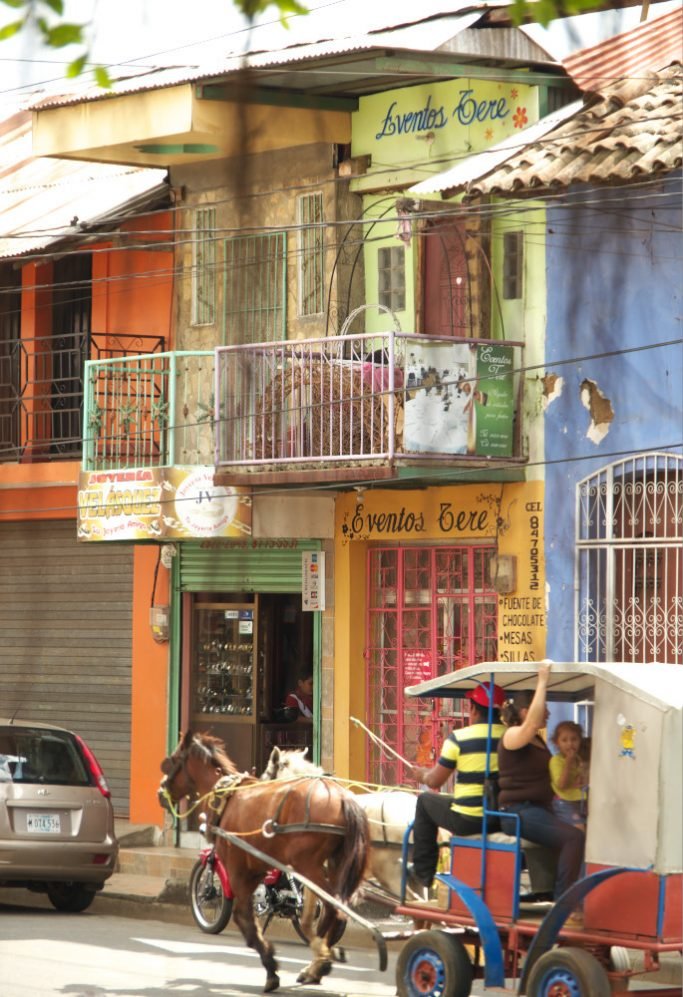 Nicaragua is democracy on a paper. Since 2007 it is in fact governed by President Daniel Ortega.

You might ask what is there to see for an adventurer in one day. Well, pretty much actually. Granada City and the huge Nicaragua Lake are worth visiting alone. Granda is the oldest colonial city in Latin America and has its own amazing charm. 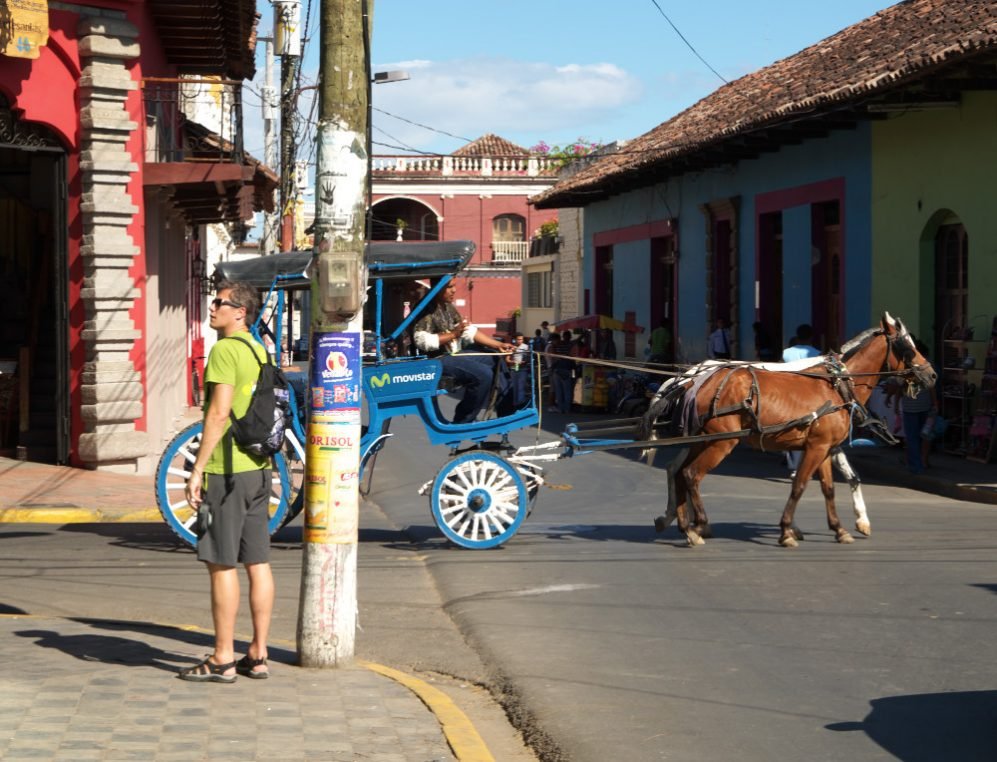 The guide from Costa Rica was keen to tell us the “facts” about Nicaragua and Costa Rica. As he explained the average salary in Costa Rica is four or five times higher than in Nicaragua. This is one of the cases where it is better to check the numbers in Google. The differences are not that drastic, but Nicaragua is a poorer country, of course. At the same time, it seemed much more authentic than Costa Rica. People are also smiling a lot more in Nicaragua than in Costa Rica. 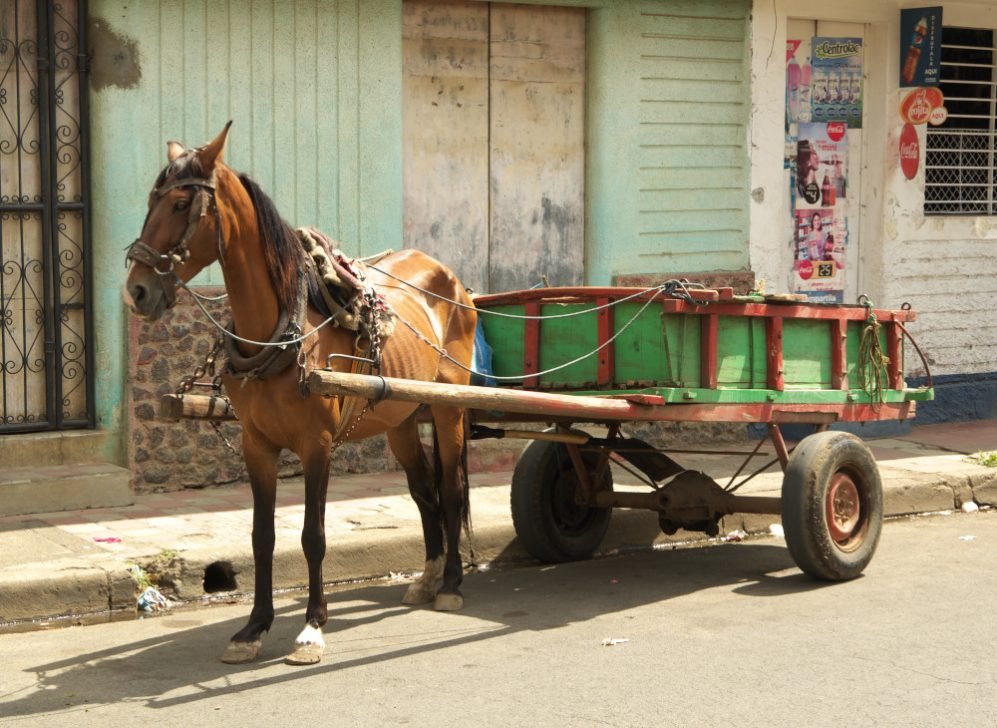 Nicaragua was also more colorful literary. Most of the buses were in all the rainbow colors. Nobody saves colors on the walls of houses here as well. Everything looks alive and punchy. 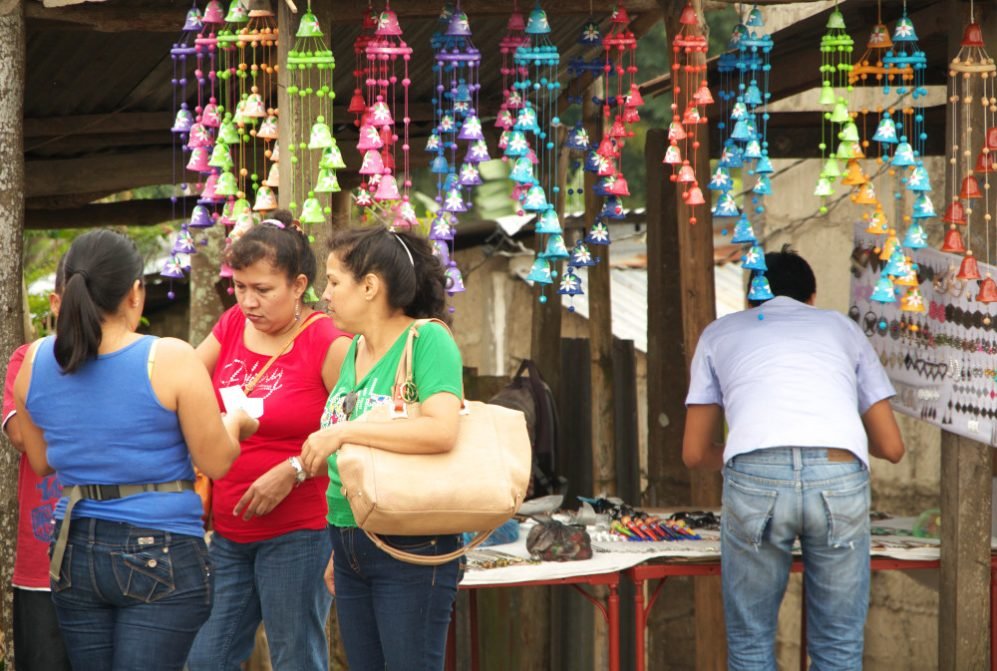 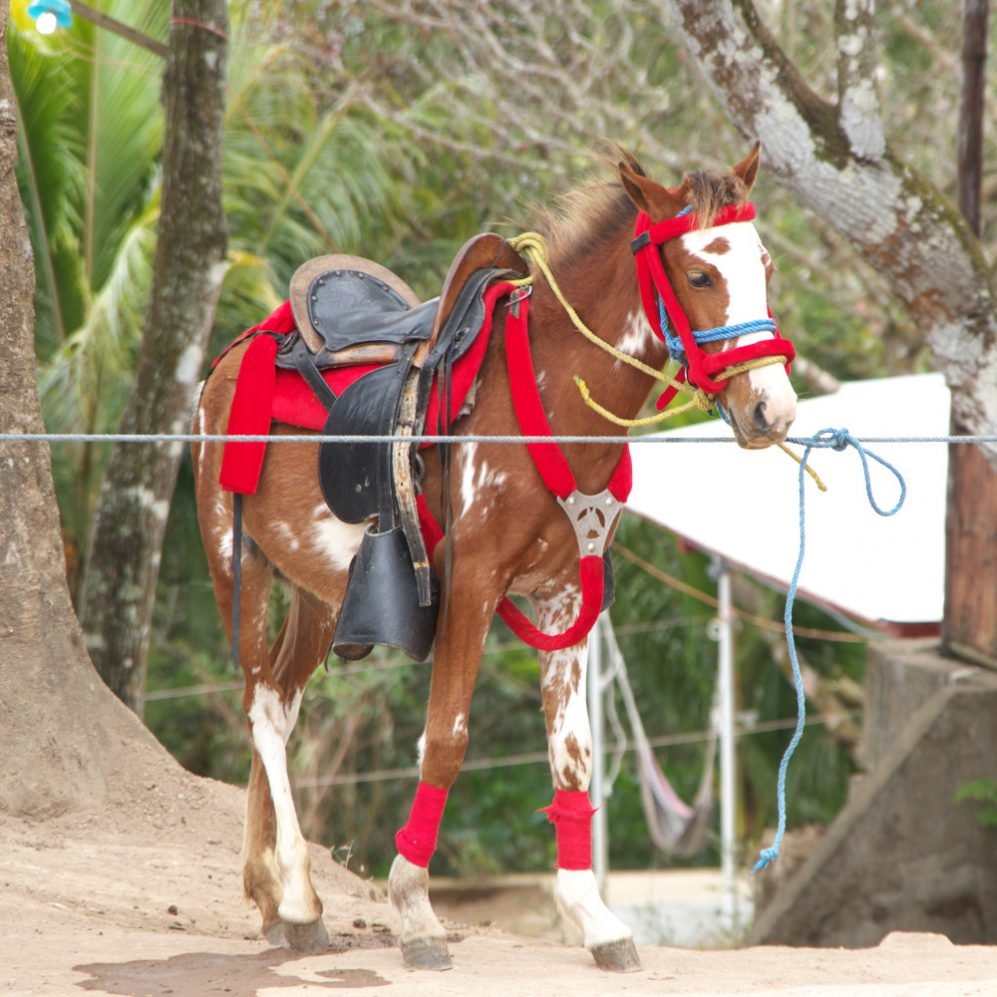 You can exchange money on the border or on the streets here. It is possible that the only reasonable exchange rate you can get only on this so-called “grey market”. 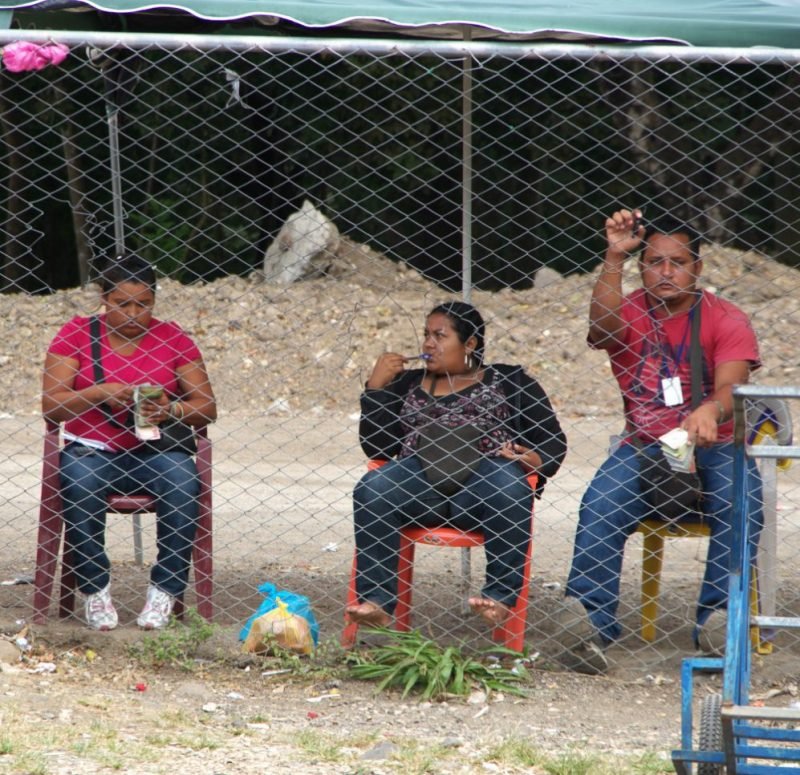 Nicaragua is a relatively isolated country. Thus, mass tourism has not yet spoiled it. This country has its natural charm and simplicity. Sites like Granada might be polished for tourists only. Yet, the general impression is very neat. 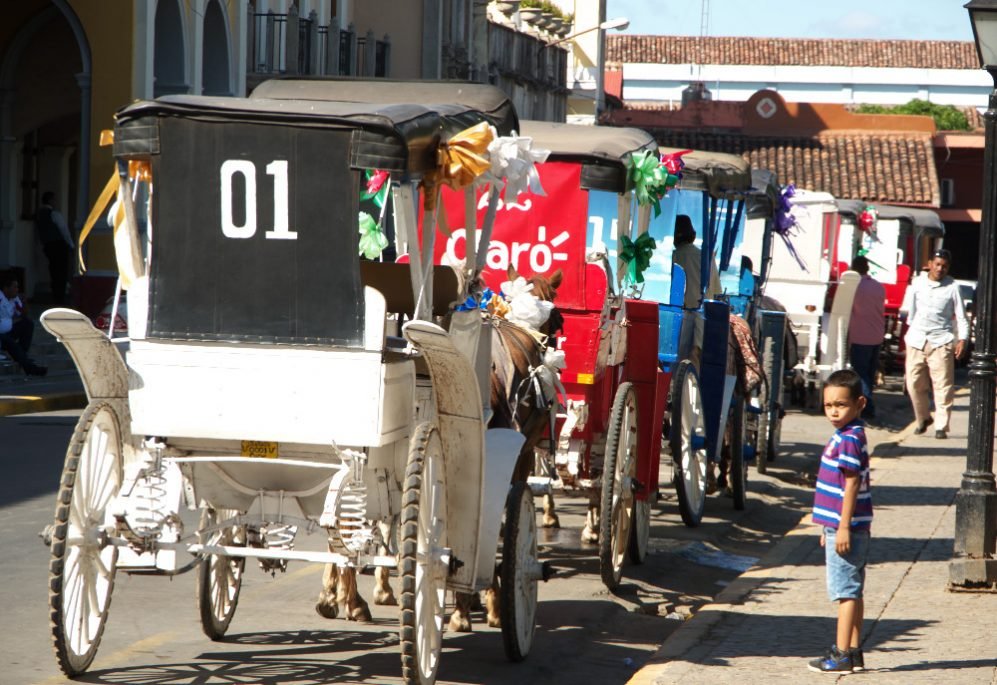 We also visited the active volcano Mombacho, which is not far from Granada. The volcano is pretty impressive. Its crater overflows with vapors of gases. It gives the volcano an incredible look. Yet, the wind changed its direction towards us. Thus, we had to leave the volcano as soon as possible. The gases are toxic and nobody should stay there longer than for 15 minutes anyway. 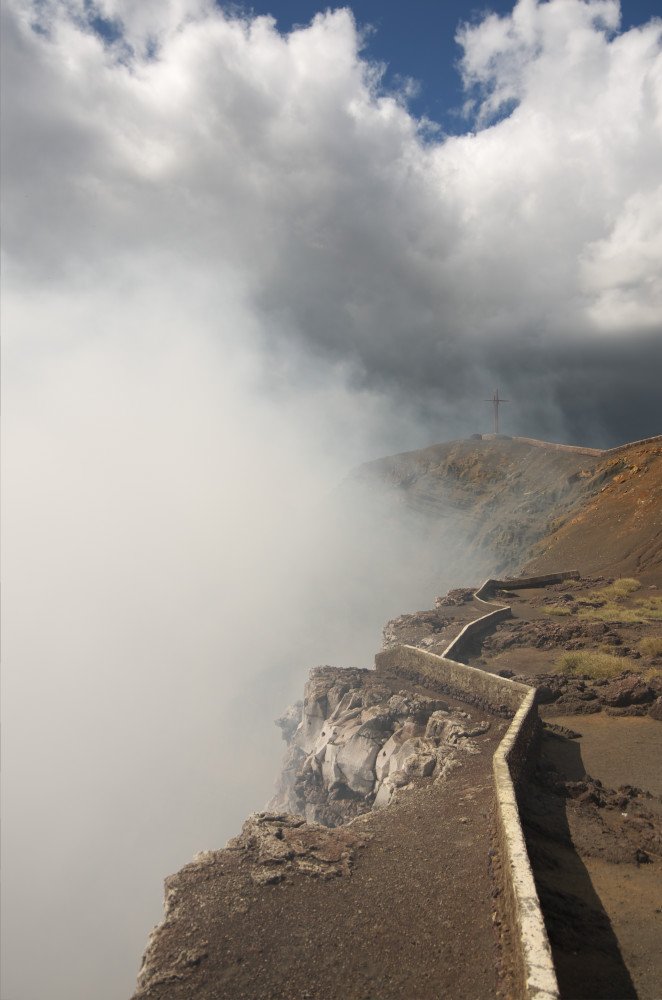 The long day in Nicaragua was still too short to catch the soul of this beautiful country. Yet, as said it was worth it. I am ready to return for a longer adventure trip in Nicaragua alone.

Now it is time to mention at least one traditional tourism spot in Costa Rica. We visited popular Coco Beach (Playas del Coco) in Gunanacaste region. We visited it shortly to have a glimpse of what it is. Yet, I can say that if you go for a real adventure trip, you will find adventures anywhere.

Coco beach is a great place to go for diving trips to Papagayo Bay, Isla Catalina, and Bat Islands. Yet, it is also a touristic site with bars, restaurants and lots of American tourists.

I am overall an open-minded and tolerant guy. Yet, to be honest, the preferences of some travelers have never been clear to me. Why you should go for a trip abroad if you people prefer to stick to what you have used to at home. You can find the same (safe) food, the same brands, the same signs of globalization all over the World. For God’s sake, dare to go for new impressions, go for authenticity! Taste them! Go on an adventure trip! Enjoy the different cultures, traditions and various dishes that you won’t find at home! This is what life’s all about: experiences. OK, I know it is a kind of comfort zone that is difficult to leave. We all have one. Yet, you can try and stat with something small. You’ll see the massive change from your own perspective. You will see a different World.

After I did a couple “must do” dives in Papagayo Bay we continued our adventure trip more off the beaten path again.

On the way to the Caribbean coast, we stopped by the famous Arenal Volcano. We had booked the hotel with the best view during our adventure trip. 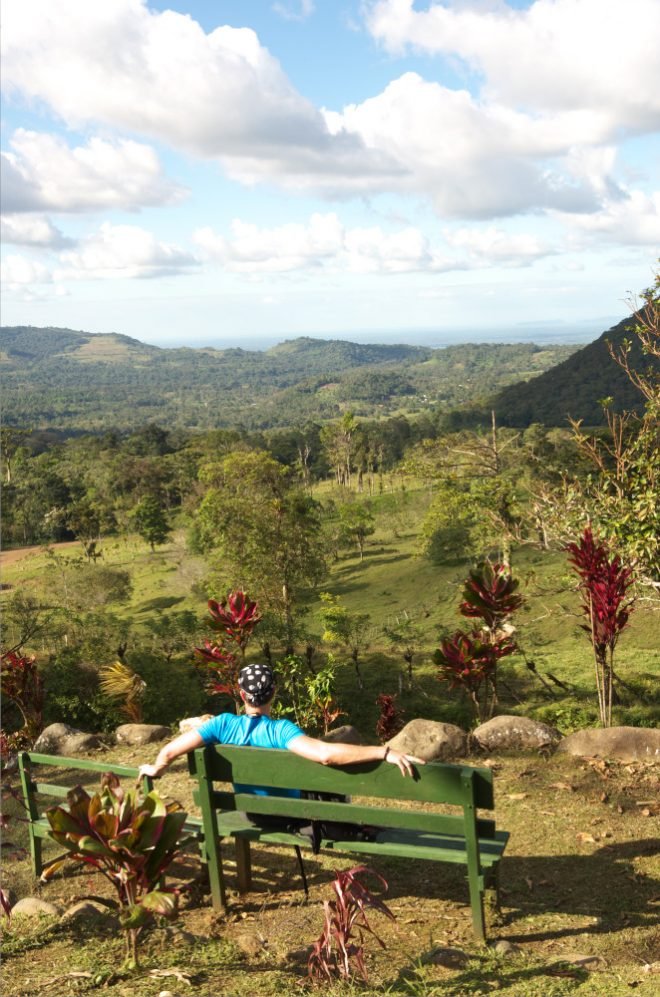 Arenal Volcano stands out from all the other 120 volcanoes in Costa-Rica. It has the “typical” shape of the volcano. This is the shape that we all have used to seeing on postcards and photos.

The windows of our hotel room faced the top of this great mount. The Arenal Volcano is still active. At times it erupts the view from the window should be terrific. Yet, we were not that lucky. The volcano is asleep already for several years. Besides, during our stay, the clouds hid the very top of the mountain. Instead, the fantastic view of the Arenal Lake rewarded us a bit.

Well, this is another reason to come back to Costa Rica one day again.

Read the last Part V of this adventure story here.

Kazbegi Georgia (Sakartvelo): Things For You To Know...

How I Discovered David Gareja: 8 Reasons Why...

Why You Should Travel To Sakartvelo Or Georgia...

Why You Should Go Off-The-Beaten-Path In Latvia: A...

Winter Kayaking In Latvia: An Ultimate Adventure In...

3 Best Things To Do In Tenerife Apart...

I'm Rolands. I'm traveler professional, biologist, nature lover, entrepreneur, conservationist and improviser. I'm here to help you to get the most authentic and green travel experiences.

Escaperies.com is a site designed for the greatest escape travel stories and tips. Discover new authentic places and traditions! See eye-opening things! Meet like-minded people! Step out of your comfort zone and get transformed! Do you want to travel green, fun & adventurous? Do you want to leave a positive impact? Well then, this is the site for you. Let me help you to find your own off the beaten path.

Get Your Free Travel Planning Guide!

This website uses cookies to improve your experience. We'll assume you're ok with this, but you can opt-out if you wish. Accept Read More